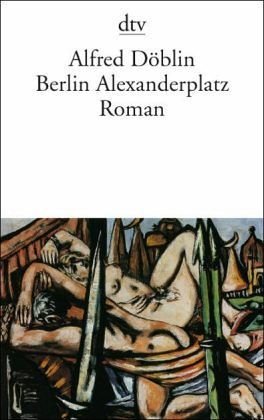 Doblin's book is a long but nevertheless fast book.
The story of the book is really straightforward, the things one can get out of reading it are much more complex.
It is a rewarding, enriching experience. One gets a glimps of the Berlin of the 1920s, growing fast.
The book is very much modern: it uses intertextuality and pastiche, pasting in and incorporating news, weather forecasts, tabloid headlines, and other material. It does it in a seemless way: one feels as if one would be watching a movie and walking with the characters through the streets of the city. Instead of exposition, the real-life materials, like texts of advertisements, make one feel that one is there and seeing the ads displayed. This is a more immersive and more elegant way of setting up the mood, and is also often used for comic or ironic effect by Doblin.
The story also shows both characteristics of futurism's fascination with the efficiency and speed of the world. French urbanist Paul Virillo talked about the great change of quality of life that the speedier commerce, commute, and production brought with it. It wasn't just the same old life becoming faster, it really was a new world, new ways of doing things that were non-existent before.
Neue-sachlichkeit also put its stamp on the work. Doblin shows things often in a realist but somewhat pessimistic way, being more sensitive to the negative features of the world. This is not a criticism: the world is full of evil - people who do bad, know that what they are doing is bad, but nevertheless enjoy the act or its fruits -, of insensitivity and so on. And contemporary books and movies often err on the positive side. Still, a negative view isn't a balancing anti-dote, it is just another somewhat biased view. However, it is useful, and fascinating to see the world of working class, low income, and criminal Berlin.
The characters and lives appearing are fully believable and immersive. I often felt as if I myself would have known these people, at least indirectly, as friends of a friend, and accordingly, developed strong emotions towards them while lamenting their bad choices and blindness to danger and risk.

Overall, it was a heck of a ride. Reading it in German was hard at the start, since the book employs the lingo of 1920s Berlin, not the Hoch-Deutsch that one hears these days on nation wide broadcasting television channels. At the same time I cannot imagine how hard it must be to translate the book and recreate the effects and mood of this style in another language. If you can, do give it a go in the original.
Tweet