"Google is my god." An agnostic atheist raised as a Protestant Christian in the United States, once I left organized religion, I would joke when asked about my religious affiliation that I practiced "Googlism" saying Google was my "god". I would say this partially as a joke and partially because I knew, even then, that Google would be the closest thing to an omniscient and omnipresent entity that knew the most about me. I've been using Google since its earliest days on the Internet, back when I was a wee elementary school student in 1999. I signed up for Gmail in its beta stage, when it was accessible via "invitation only", back in 2004. As an avid practitioner of "Googlism" since 1999, I tried to convert others by inviting all my closest friends and family to Gmail. Four years later, in 2008, I began using the Google Chrome browser and still use it to this day.
Nowadays, the use of Gmail is practically ubiquitous for Americans under the age of 50. Some stick it out with their old Hotmail or Yahoo mail accounts, but you can tell someone is not tech-savvy or guesstimate their age just by their email addresses. Google is the main search engine for most people around the world. The term has become a verb and telling someone to "Google it" is commonly understood. Chrome as a browser is also the most popular web browser (with usage rates of over 55% of the global Internet users) in the world. Needless to say, Googlism is truly spreading far and wide. I no longer need to attempt to evangelize others into joining the movement.
All things considered, Googlism can be a bit disconcerting if you think about it. While Google claims not to sell your data, it most definitely tracks it, including your browsing history, search history, email use, YouTube videos watched, internet shopping history, among other information. I'm sure Google could figure out when and what I wrote about for every single school essay or assignment since 1999.
This is why I was surprised by what I discovered about Google's understanding of me as a person. Today I found out, based on how I use the Internet, that Google thinks I'm a childless, unmarried, male non-homeowner between 25-34 years old with a Master's degree and lower-middle-class income. My other interests, according to Google, are shown in the screenshot below: 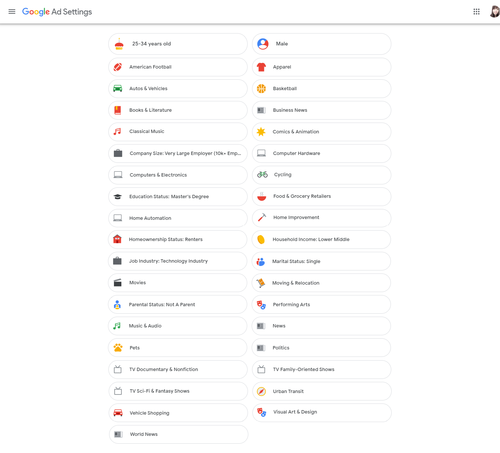 I've always known that I use the Internet more like a male than a gender-stereotypical female, but some of these estimates are inaccurate. Not only am I a female, not a male, I also don't work in the tech industry, nor do I have a lower-middle-income. Seems to me like Google needs to work on improving its data analysis algorithms and stop gender-stereotyping women into a narrow category of those only interested in hair, makeup, clothes/shoes, and shopping.

In the meantime, I've disabled targeted ads and turned off Google's tracking of my web & app activity, location history, and YouTube history. I've also cleared out my entire cached search history and plan to delete my search history at the end of every month. While I won't stop using Google, Chrome, YouTube, or Gmail, I think I'll take some extra measures to protect my privacy, especially if Google will wrongly make certain assumptions about me that completely miss the mark. If you are also a follower of "Googlism", I encourage you to do a "Privacy Checkup" and find out what Google thinks of you.
Tweet 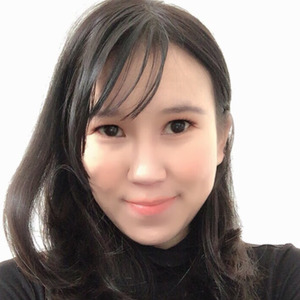